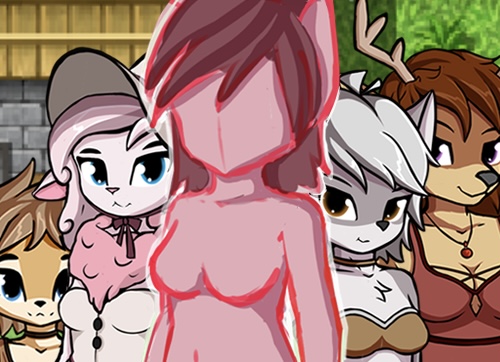 Our long-awaited addition to the game is finally here!

Starting today, you can settle your original character in the village or order a scene with any character of your choice! Now the characters of our followers can join the ITW universe, and you can literally become a part of the game.

To release this option as simple as possible, we created a special Commission Tier on Patreon with one of two possible options:

1 Your character can become one of the village dwellers, getting a dialogue portrait (with clothes and naked), several emotions, temper and name, pixel sprite, and a place in the village (or other game location), where it can be found duringthe game.
Moreover, you can create a rival character as well, who will live in the PvE field and fight against John - just like Irena in the crown quest. Instead of a dialogue portrait, they will receive a combat portrait and a few options, like naked, armed with some item, getting damage, etc.

Both male and female characters are possible.

Also, we can mention you as the character owner when interacting with them!

2 Instead, you can order an echo scene (based on any scene or teaser in the game) with any existing or your own character! Just choose any scene in the game, pick the character, and add the action description - it can be similar to the original scene or your own, but the pose and the figure shouldn’t be too different from the prototype.
We’ll draw 3-5 static frames, including clothed and naked options, cum, or whatever your idea is. Background can be changed too. The secondacting character (usually John) can be changed only if he’s partially seen, or make a “flying dick” like in the veggies scene, as otherwise, it’ll mean drawing one more character and take twice more work.

The artwork should fit the general game setting (of course you can order any scene of your choice, in case you don’t wantit to be added to the game).

Then the scene will be added to a certain place in the game (you can decide where exactly).

In case the participating character isn’t existing in the game, we’ll attach this scene to a default/dim portrait character.

The option of adding a furry male (instead of John) with keeping the same girl is possible too!

The algorithm is easy:

3 Then our artist, after discussing your wishes and ideas, will start making the work

4 We’ll share the progress through the drafts step by step, so you can see how your cutie is drawn and offer edits

5 Finally, you can give some specifications like name, temper, and text lines to your character - and we place it in the game!

Of course, the character/scene stays in the game forever even if you unsubscribe.

Animated scenes can be used as prototypes too, but the resulting scene will be static.

You’re welcome to contact us to discuss your idea before paying, so we can decide everything and give additional info.

A one-month subscription gives you one of two possible options. You’re welcome to order more scenes or one more character in the future.

Animated scenes or scenes drawn from scratch are possible at a twomonth price.

The character/scene can have a few dialogue lines of your choice.

No other content will be made with your character without your permission.

Also, the Commission Tier gives you all the benefits of the Lion Kingtier, including adding your name to the Hall of Fame!

Note that if you can’t technically subscribe to the tier, we also can use PayPal or other payment methods.

Get Into the Wild

Download Now
On Sale!
69% Off
Name your own price

can you make a browser version

it already exist for public